If one ever feel in dire need of some good vibes from Mozambique, Ghorwane can fill that gap.
They have been playing since 83, and kept their good energy, they are still the good boys Samora Machel called them once, with a few more wrinkles, white hairs, probably a higher body mass index  but well trained voices, musical skills and show. 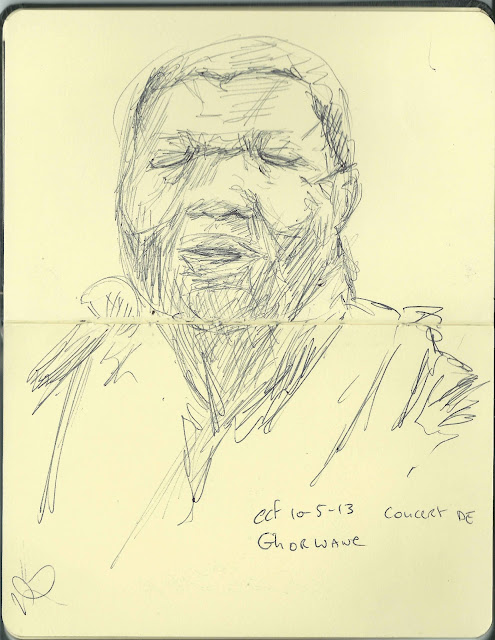 The sketching was interesting, the CCFM (www.ccfmoz.com/)‎ concert hall as dark as it should, the public started seated on the arena's benches but we were all soon standing dancing and singing along. In my case I was faking to sing, and have had many reasons to:
First, if Mozambicans have known the band for 30 years, I was hearing them for the first time.
Second, I barely hear words in songs, and have an absolute talent to not remember them, not even twinckle twinckle little star or bah bah black sheep, which made it in the under 3 years old top 10 for the last 200 years.
Third, i was already trying hard to move to the riddim and draw to the beat, which are 2 things to do simultaneousely: difficult. 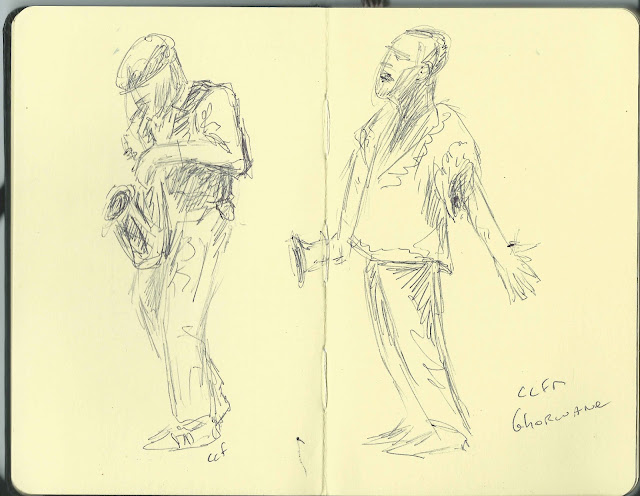 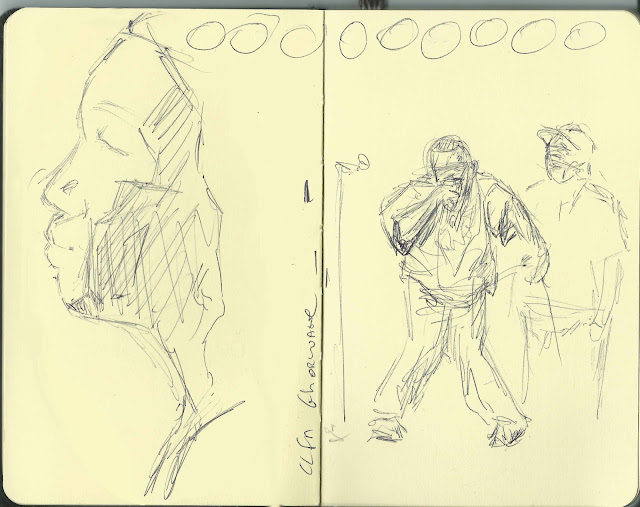 As I was sketching that girl on the other side of the aisle when a guy dancing accidentally pushed another guy that was making his way down. His glasses fell and broke. An altercation followed, the band was playing, the guys were competing in order to make their point clear,

a bit of a push on either side, crowd is forming, the band sings about love, doves, sea, sex and sun. The guys are trying to out-shout each other, veins are pumping in their necks, their faces might have been crimson red, but I couldn't tell, because it was dark, and they were mozambicans and it is blimming hard to observe baffled blushing black blokes batteling in the dark.
Eventually the broken glass guy put an end to the conflict by pulling the glasses off the dancing one (who also had a pair on his nose) and in a remarquable justice-seeking act of equality, broke them  then threw the pieces to the dancing crowd before running away, leaving the guy completely taken aback, outraged and ready to murder him.
An eye for an eye they say.

As for me, for the price of one I had 2 shows. Now that is even better than most cell-phone promotions. 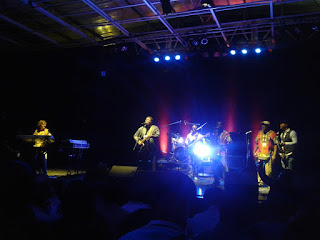 Posted by fredasketch at 5:53 PM No comments: