Uploading impossible, thanks Vodacom, thanks Econet

from Beira to Harare, internet is still not allowing me to upload pictures....
need some serious zenitude sometime.
tomorrow is another day, as they say.
HIFA is on, and that is good.

Posted by fredasketch at 4:15 PM No comments:

Day on the beach

So, Sunday I spend some time - waiting for a piri-piri chicken to be caught, feathered, gutted, spiced, grilled and served- on a nice terrasse from an old falling-down house on the beach at Estoril.
I made a sketch of the morning view which I managed to scan (it took me 2 weeks to get a scanner to work, get connected to my computer and find some time to scan the sketchbook), and it is quite nice as well, with the rusted skeleton of the Macuti boat, the lighthouse etc.
BUT, and there is always something similar happening here, the TDM connection I have is just too slow and weak to upload anything bigger than 600ko. So I'll post it later, after going to vodacom, charge my internet account etc. as the saying goes here... amanha!
So, I had some time on the beach-I-cannot-share-the-sketch-of, catching on people passing by, listening to the melodious high powered speakers next door, with the latest passada tune, and the fabulous comments of a beach volley-ball game ("Agrrrrradecemos a Municipalidade da Beirrrrra e a Assssssssociaçao prrrrrovincial de Volleyball pelo evento, Agorrrra a equipe feminina da Universidade Pedagogica vai jogar contra a equipa masculina das forrrrrrrrças arrrrrrrrmadas, Agrrrrrrrrrradecemos a Municipalidade da Beira ....").
To be honest, when I realized that there was a stage and humongus speakers being connected with 13 fifty meter extensions to the fridge of the restaurant where I was intending to eat, I did fear another OMO, coca-cola or dishwashing liquid promotion. Those are particularly bad because generally there is an attempt to have some type of play-back / talent show or dance contest and the music-man puts the sound so high that the speakers actually crash all together. It is otherwise known as a musical suicide.
So I was rather happy about the volley ball event, the passada etc.
I got my chicken after 2 hours, wich was exactly what the guy told me when I asked, he said an hour for the chicken (+ an hour for the fries, the sum is right). 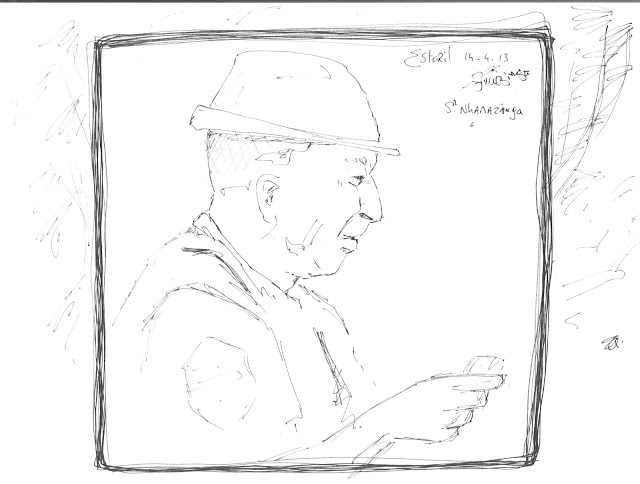 Sr Nhamazinga was having a sunday-beer, he saw this profile and was actually happy about it. So he signed the page. Good one. 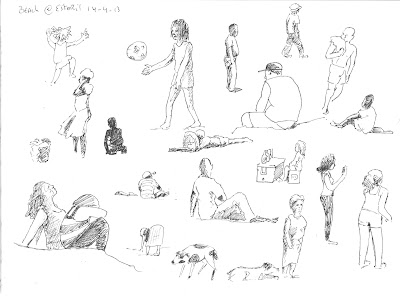 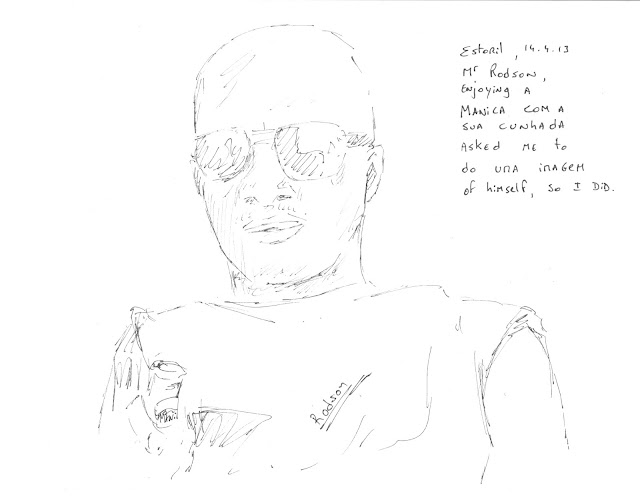 Rodson saw the sketch of Sr Nhamazinga and asked me to sketch him smiling and with his manica. He gave me 3 seconds of smile before freezing in a neutral tone. I do think that what he really wanted was to get me to draw the 2 women that were with him. I was keen to do so but they did not want.
It's just fun to meet all sort of people.
There also was a Spanish guy who watched the beach pic, then he must have taken 100 pictures of me sketching. I draw, others picture, fair enough.
Posted by fredasketch at 7:20 PM 1 comment:

Leaving Harare for Beira tomorrow and going back to spending a good amount of time in bars and restaurants, patiently waiting for my orders to eventually be ready.
The following sketches were made last time I travelled there. Mira Mar, disgusting food, peculiar and mixed clientèle, is a great place to sketch, there is always something to catch, people having a drink, the ballet of friendly girls, the band,... Unfortunately now the beach front has been blocked by large canvas, so it's not possible anymore to sit and sip whilst looking at the sea, the sellers and courageous joggers. Will try to get it next time, from beira bar then.

These two next sketches were made @ bambu bar, recently opened by Fidelina. Its unfortunately difficult to find for it is hidden in a back alley of the Ponta Gea market and there is absolutely no indication about it on the door... which stays closed because of the aircon running. Then again, one feels like a guest there, sharing the secret of a shadowy place. 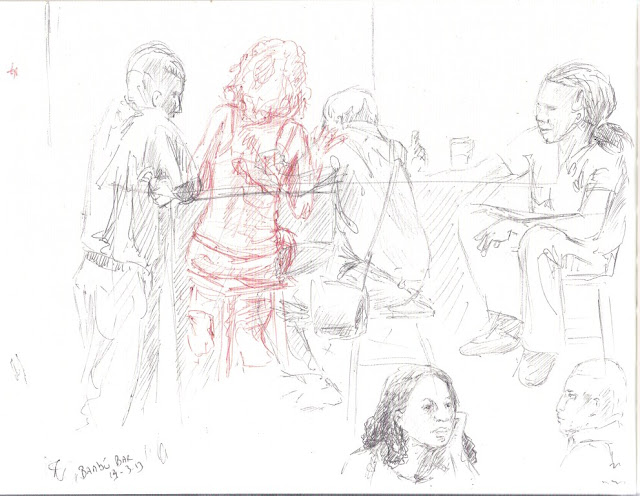 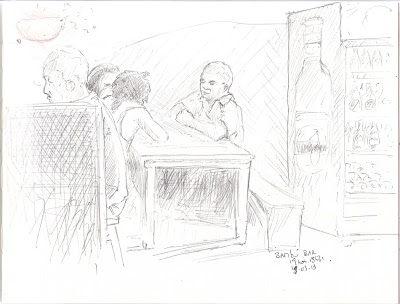 A quick face caught at the Esplanada bar. I don't even know its name, its on a type of mirrador in front of the central hospital of Beira. Was having a small beer with Martin there, who seems to be a frequent customer there for as soon as he parks his jeep, the waiter opens a small 2M, prepare an ashtray and trains his smile. That day, Sheila was enjoying the hospitality of the Hospital Central of Beira, giving birth to a big boy. Because Martin was not welcome in the delivery room, we had to stay at bay, close enough to be able to hear the screaming and smell the iodine, but at a reasonable distance not to be seen with a beer and samusas. Women in labour have little sense of empathy. 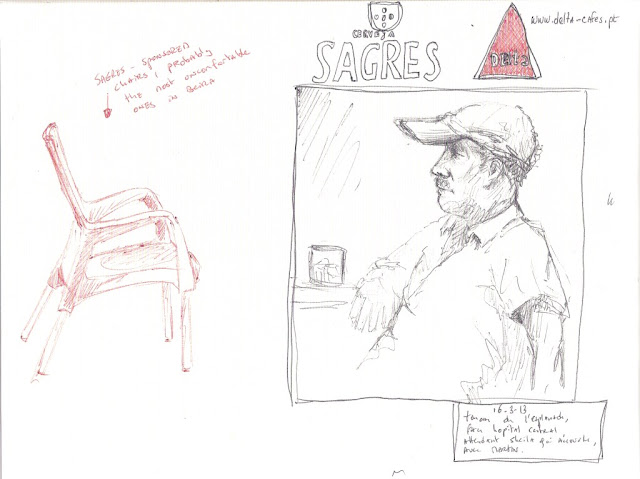 This one was done at Solange, although the coffee and pastel de nata were taken the next day at So bolos.
Moz imports a lot of things from Portugal, and Delta Coffee seems to be a must for all coffee places in town. I don't want to disrespect the delta corporation nor the great portuguese industry behind it (or Sagres beer), but there are other alternatives, and Zimbabwe is producing great beans.

Speaking of Sagres, it is sold in 20cl beer bottles. How ridiculous, looks like one of those you will receive in a plane. So sitting next to the natives of the algarve, full of saudade of their home country, sipping minuscule droplets of Sagres, you will find any other connoisseur  with common sense, going for the local cervejas that not only taste good but as well is made for the climate in 33 or 66 cl.
I recently discovered that in the one dry restaurant (Churasqueira on the independence place with the Samora Machel statue), they started selling the 20cl Sagres. To me its either because they think it is a joke, because they appreciate the effort of putting so much package for such a small contents or because they see it as halaal. In any case, when a dry place serves Sagres, water and juice, there is something fishy. 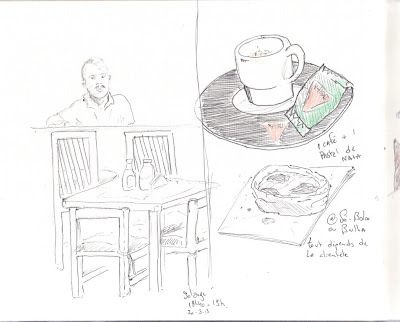 Another good spot, the 9to9 bar. Good food, good drinks, good prices.
And here he was, in front of me, El Père Noël in person, sipping a draft, talking business, in a blue overall.
I always found the HoHo-man a bit too much: Who in his right state of mind would be pretending to have a healthy relationship with deers and gnomes, only wears red fluffy coat and trousers, speaks with a US-accent and above all lives in the pole and drinks coke instead of the aquavit (that is the only way to keep blood from freezing). It did not look anything else but fake and every christmas, I have to lie, and lie and lie  and lie to my children. It's a torture.
Now I know better, he pretends to do that, probably for adverts reason, but in real life, he lives on the beach in Beira, does not drink Sagres, specializes in radiators and even speaks australian. Now I've got something with substance to tell my kids when I lie to them about who is piling presents under the Christmas tree, it will make me feel less bad.
I hope I'll see the Easter bunny in one of Beira's bar next month.

Posted by fredasketch at 9:51 AM No comments:

Looking for bamboo cuttings at Tony's Farm in Catandica. His camp is in a stunning place, with a river down, looking at the cliffs of the mountain range. Deep bush it is, amazing WE.
Posted by fredasketch at 7:18 AM No comments: 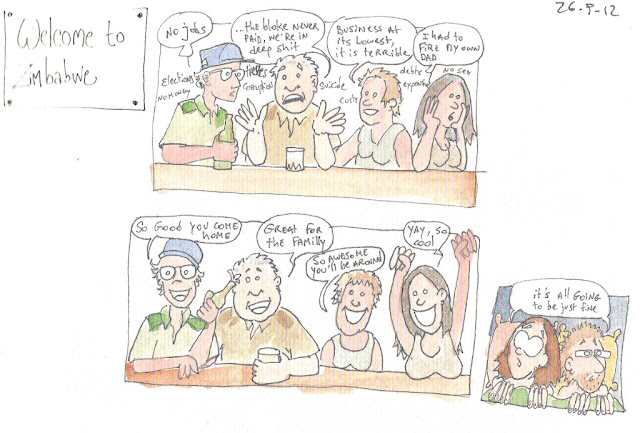 Louise and I lived for 3 years in Benin, 3 in Togo, 5 in Mozambique, had 4 kids between borders and had lots of things happening to us, by us and for us. I always could manage finding a job that would work for me in places where we wanted to be, or sort of. My work books are filled with notes from meetings on the right page and doodles, sketches and cartoon characters on the left one. I feel i want to start paying more attention to my left pages.
From the first of January, we are now on our own. I am working as a consultant in child protection and other services, opened a sociedade unipessoal limitada in Mozambique and Louise an enterprise in Zimbabwe, she will focus on conservation and bamboo.
And we moved to zim with the firm intention to stay there, develop roots and see our kids growing with family, and friends that are not moving to the Congo or Angola every second year. Big jump. Million of stress material, in the aspects of administrative procedures, schooling, house hunting, travelling etc.
To resume a hectic semester, lou had a beautiful baby, Elena, we have a astonishing house on the top of the world, kids love their school, family has christened the bar many times, and we still smile and wave when people ask us the job question. Lots of projects, and small/big steps to turn them into reality.
As for my left page dreams, this is the beginning of my blog, gathering sketches made along the way. It starts as it should, with wise words from our first night in Harare. Ambiance!

Posted by fredasketch at 9:50 PM No comments: