Well, a month without sketching, going through a scanning adventure and uploading went by, and funny enough, the world has not stopped, not even slowed its rotation. How disappointing.  Not very good at all for my ego.
So lacking new material I’ll just put some outdated stuff, sketched last month. I’ll try to put some stories behind them though.

First, a view of Harare, from the 7th floor at Eastgate Mall, where I went for some meetings in REPSSI’s offices, meetings for my other life, working in child protection.
I think that the road depicted is 2d Street, heading towards the train station, I am very bad with names, it could also be Takawira, Chitepo or R.Mugabe. All heroes (but Second street). One should know them, I shall not detail the deeds and wonders they brought the world, Wikipedia is a very usefull tool for those who want to learn something in that respect.
Truth is that -apart from street names-, Harare centre show nice pieces of architecture, from early 20th, art deco small shops and buildings, Victorian style and colonial English, the type one can recognize in places where the british empire created cities. I should really try to find or set  a group of urban sketchers to roam the city centre and share its interests with the global world.
Another great thing about Harare, is that the place enable us to meet and discuss with members of the force. Not the laser-sabre ones, unfortunately, but the constables. Always ready to share their points of views, discuss eventual disagreements and test one’s knowledge of the law. I still feel that they should handle diplomas of good behavior and incorruptibility, once you are stopped by a constable for something you did not do, try to be fined a fine that is not existing and ask to pay it outside what is set by the law. I have a dream of discussing my case for 3 hours on the side of the road, being send to the cop shop to continue the debate and then, after a day spend over a 20 usd fine that should not be, to have the lady in Kalashnikov smile and say: “Well done Fred, you are really worth living here, for not taking bullshit, for not allowing quick bribes, for not being intimidated by the uniform or the nozzle of the AK, and in all cironstances to remain straight, righteous and honest. Please, here is a honorific diploma with the warm embraces of Zim Road Police Force”. She would then stamp the certificate, kiss me on the cheeks whilst hugging me (I will then understand the use of the AK, to keep a safe barrier between the agent and me, in case the sudden change of mood makes the embrace uncomfortable). I guess that such certificate could also be taped on the front window, under the insurance, the radio tax paper and the road tax one, and could serve as a waiver for every other police stops, let’s say for a year. It is utterly difficult sometime to explain to my kids the good cop /bad cop imbroglio. One day I have to tell them that mom is at the cop shop to put a police officer to prison, one other day we need the help of the police because they are here to help the common folks against thiefs and bad men. Then again, at least around here there is always room to discuss, whether you are guilty or not, and the encounters with the 3d kind make great bar stories.

In the meanwhile in Mozambique other uniformed lads from the opposition party understood that the system is a bit unfair to any discording voices and decided to take up the weapons once again, after years of peace and stability. Armed groups cut the north-south road, train lines etc. Worse still, they RPG two trucks from Cerveja de Moçambique, killing two. So travelling by road got more spicy: there is an added chance of getting bullets and a lesser chance finding a cold beer to quench the adrenaline rush.
Anyway. Life is good.
The sketch above is from the beach in Beira, behind a hotel complex made in China, the Golden Peacock Resort, the canon is probably russian, and as any military/offical/administrative building, taking a picture of it can lead to prison (cfr Lianne's story ), but I don't really know if  drawing something one cannot picture also constitute a crime. I really should ask my lawyer here about it. Anyway, a couple beers, a pack of friends, big guns and the beach, a nice way to spend a sunday afternoon. 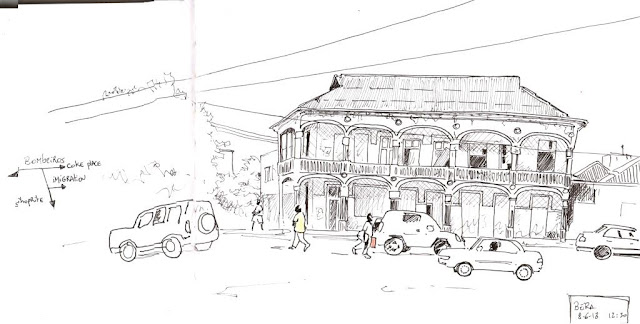 Above, a house I wanted to sketch for a while for it is always in the way. On one of the posts with the sketches from mozambique of 2012, I've drawn the bombeiros,. Well, this place is not too far.
The next view, neither. From the fire-man-house go straight towards the house sketched above, and continue, one should reach the Praca do Sun Light (a very popular chinese entertainment place with a jumping castle for kids, hot dogs, burgers and beers) from where this sketch has been made.

I had to meet up with two guys who came back from France doing a juggling technique taining. I was late, they were later, so i sketched the shoe and bras sellers on the other side of the road. Sitting on a plastic bench, at Sunlight. A half a dozen beers later and to resume the conversation, they are looking for some contracts or sponsors for their show. And they are bloody good (Vinos and Cokas and Co).

That is it for now. Cheers.


Posted by fredasketch at 5:44 PM No comments: