Harare, Harare, Harare,
I need to start a urban sketching group here, there are many people interested, it is just a matter of getting my lazy butt out and make it happen. I will do that after the house move, in Novembre, for I'll be a couple of blocks away from downtown and the most incredible buildings and places.
We should move house on the first of Novembre, to go to Rowland Square, a stunning place in town, a real park, old kensington-inspired style for our tropics, surrounded not by oaks but by those funcky looking twisted trees, I think they are called spitting trees but am not too sure about that. They are not jacarandas, which are bordering the streets around.
They are stunning it's all I care for.

Speaking about trees, our good friends  Rob, Ange and their boys are about to go. They have closed their businness, sold their house and possessions and will be jumping in their car, for a ride of couple of months (or years?) around Southern and Eastern Africa, then they are aiming at getting their hand on a place southern France, to start a new life, to give their kids different opportunities. I found it really inspiring, to get rid of everything and move to a place you don't speak the language of and know next to nothing about... to start again.
I wish them all the best, they are great people. I hope that they will be able to get there with their green mamba (Zim passport), and above all that they are going to be able to cope with the french mentality, for that one is very very different from the pionneer zimbabwean one.
The palm will still be standing in their old garden. I sketched it last week, the day after their yard sale.

And did some studies of Mosquitoes, from which I'm working on a more cartoony type for some T-shirt design.

The girls' bedroom has not been over-used this summer. Naomi has generally been sleeping on the floor with Oscar, in makeshift tents. They have been colonizing the entrance hall, the living room, behind sofas, under tables, in corridors etc for the last 2 months, building tents out of a garden umbrella, some capulanas and many pillows, raiding the pantry for corn flakes, biscuits and milk in order to survive the difficult moments between breakfast and lunch, lunch and dinner and dinner and breakfast. That is why the bedroom was impressively clear of toys. Most of the barbies, legos and indescriptible bits of plastic, metal and wood were all spread in the hall and in Oscar's bedroom that day.

TV is the best baby sitter and the best freezing device for people. Two quick ones of the family watching some Garfield / Scooby Doo/ or some documentary with catchy title (Most dangerous encounter/ shark bite or the like). 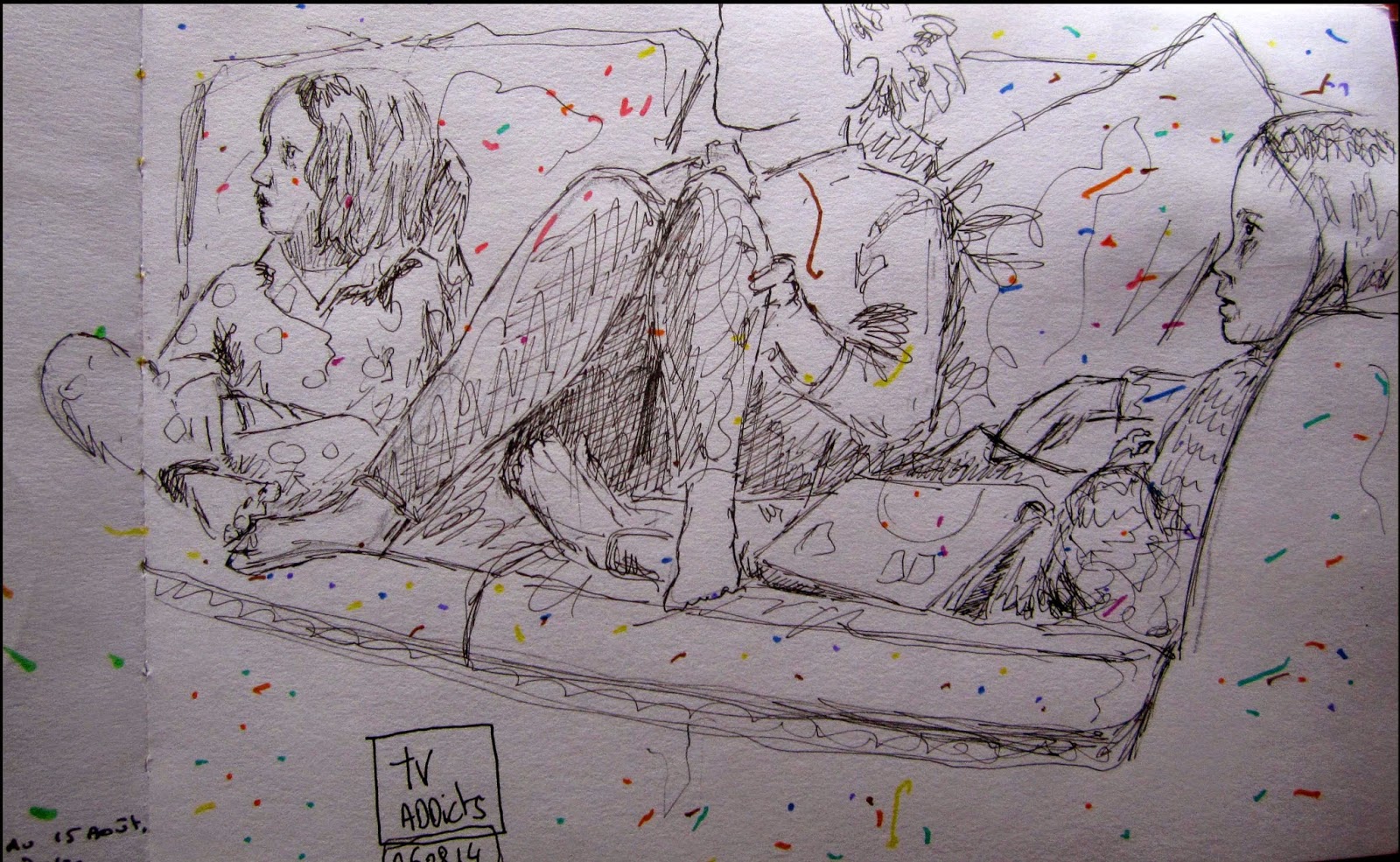 I should probably do more house sketches, for we are going to move end of Octobre. We got our hands on an amazing place, in the middle of town, an old 1935 tin-roofed house, with a veranda all around and - most of all- in front of the only small neighborhood park of Harare, Rowlands square. The park is surrounded by great big trees, jacarandas and bolivian spitting trees (?), its 5 minutes from the centre of town, a stone trow away from two of the main roads but completely out of it at the same time, in a sort of time warp. The park is a little bit unkept, but nothing terrible. For us it is a great place: in the city, on a small plot but with a great perspective, and a sure possibility to participate and bring the community together more in the public space of the square.
Our house on the top of the hill has been filled with joy, energy and great sadness, and we are very keen to move on, for new beginnings. Good things coming.

Posted by fredasketch at 8:10 AM No comments:

After a week in the bush, your legs are scratched, your beard looks rough, you smell like a cave man and you really enjoy the absence of tsetse flies when you shower.

Following the dino trip to Mana Angwa I received a phone call out of the blue asking if
Yes! A landie actually makes you popular in these tropics, and people are ready to bet that the landie driver is actually not an unpleasant individual trying to compensate with a square diesel engine. Or maybe they know what to expect but also know that it will be ok to deal with it.
The negociation with my wife was (not so) tough, not really a negociation as well. I am sure that she did not mind at all staying with the kids, and welcoming 4 friends at home when I was away. She says that it was easy, at the end, to fit all the 8 people in our honda fit. Now that I know that, I will feel less remorse next time.

So, I joined a group of four all of whom turned out to be really interesting and cool people. The Matusadona Game count was organized by the Zambezi Society. 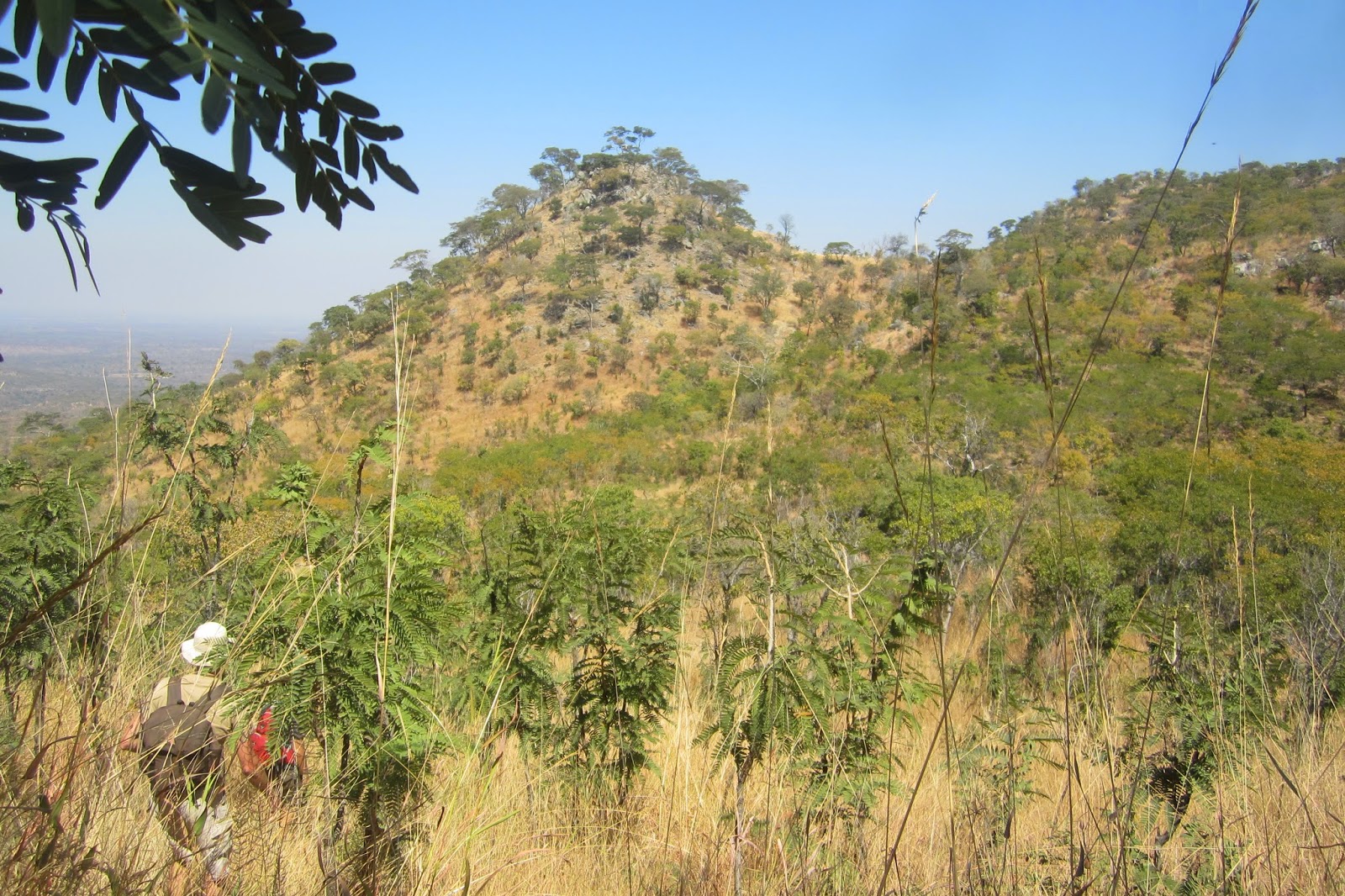 A game count really consist of walking for some days (4 in our case) in a national park, with a ranger, recording tracks, sights and signs of animals and human activity. The animals are counted in order to estimate the population and species of mamals (and birds,...) in the area, and the human activity to estimate the poaching and interaction between wildlife and humans in the park.
We camped in the park, walked in the area that was allocated to us and recorded whatever we could see, climbing hills, checking water spots, following animal tracks, and trying to be usefull to the parks and Zambezi Society.
I hope we did a good job.
Our walks and observations unfortunatly revealed that if we saw many tracks of animals, buffalo, elephants, porcupines, hyenas, kudus, steinbuck, klipspringers, roan antelopes, sables, zebras, genet cat, etc, the tracks were mainly made of droppings, scats, dungs, poo, shit and middens, along with foot prints, and bones for we have not seen many animals alive.

We walked, climbed, observed, searched for hours from high viewpoints for signs of meat-fur-and-flesh-moving things but could not see much. In four days we saw a family of elies (about 13 of them, with youngsters and teens), 4 klipspringers, one steinbuck, a couple of wardhogs and squirrels, 2 lions and a shrew. We heard a baboon, and a hyena. Not much.

On the other hand, the entire area we walked in burned on our second day, we found three skeletons of elephants, whose skulls had been cut so the tusks could be removed and saw for ourselves that the animals were fearing humans: we got charged by the elies, enough to confirm the great training and professionnal reactions of the ranger. 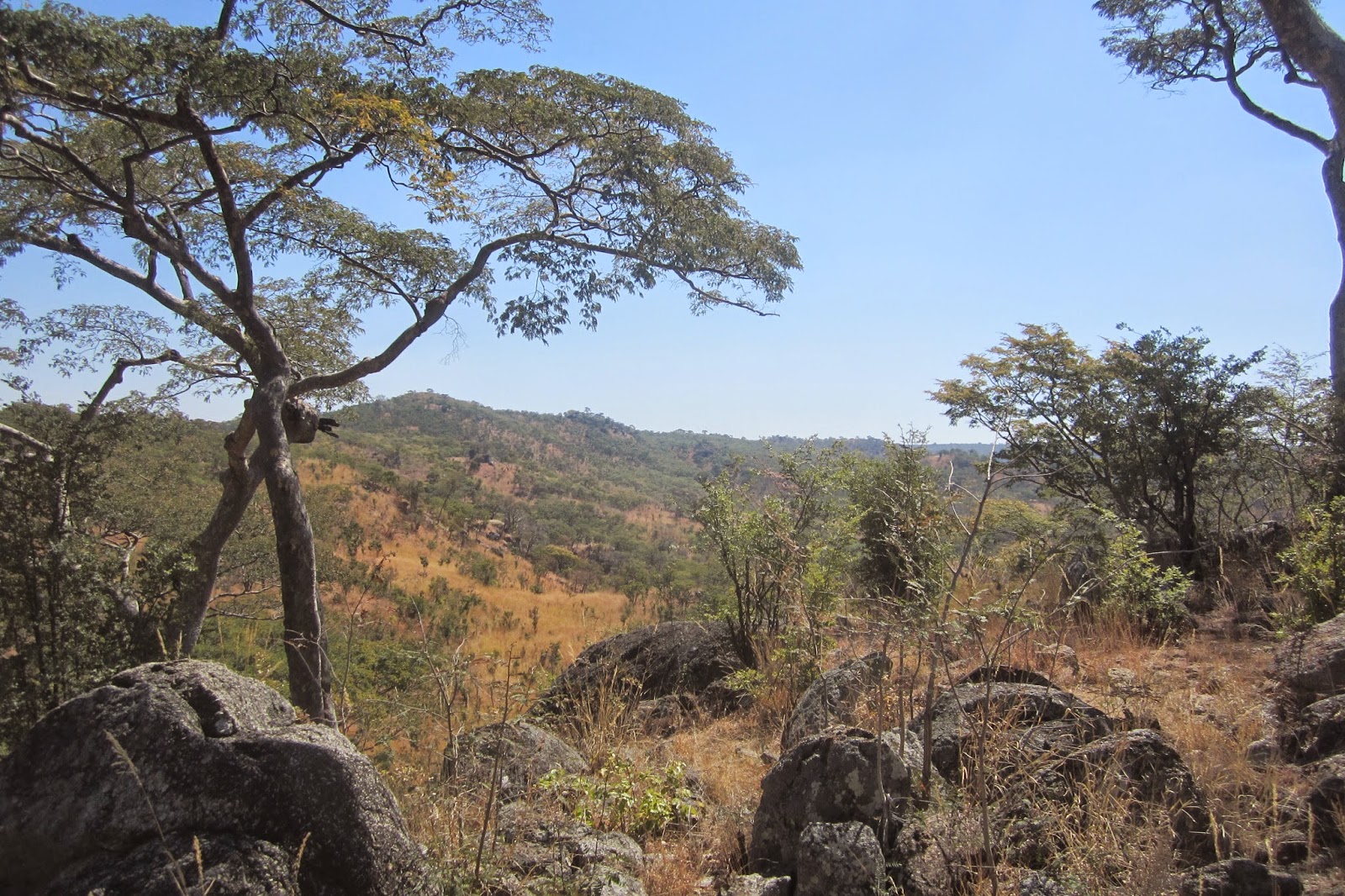 The area we had to survey is bordering the communal land that is rented to the camp fire project for hunters. The proximity with humans is generally synonymous to low numbers of animals, which we knew from the start. On our second day we spotted a fire starting behind a hill a few km away, so decided to go check it. The ranger knew that they were poachers, as they use that burn tactic to hide their tracks or to see better animals, when hunting with dogs. Reaching the hill top we saw that the fire was not alone, that fires were being lit as far as we could see, in a line, between us and the camp. such fires are made to clear an area, but are also made to move animals in one direction.
The fire did come very close to the camp and Lucy, who stayed on the campside for the day, packed up the entire camp in the cars and drove them to the river bed, saving the day for us.
On our hill top, watching the smokes and hearing the cracks of the wood burning I really felt that such a fire was not really made to help local poachers, but maybe designed to push the game towards the hunting concession. That feeling came back a couple of days later, when, on the main road we came across a hunting party. So on one hand we try to monitor the population of animals, one of the use of it is also to identify the quotas allocated for hunters, and on the other hand we saw something that seemed organized to clean the national park wildlife, push the game to the hunting grounds, and at the end we struggle to see much animals. Human-animal interaction. Humans, one point. For sure, in a country facing economical difficulties, hunters bring big money, poaching as well and there seems to be little alternatives.
Anyway, the week was very enriching and great, we clicked well in the group.

It is always amazing to walk in the bush, pay attention to small things, trying to help and make a difference, meeting new people and just doing something new.
It was also something I set as a goal for 2014: Multiply opportunities to walk in the bush and getting involved in environmental societies. Check.
Now I need to find some jobs. 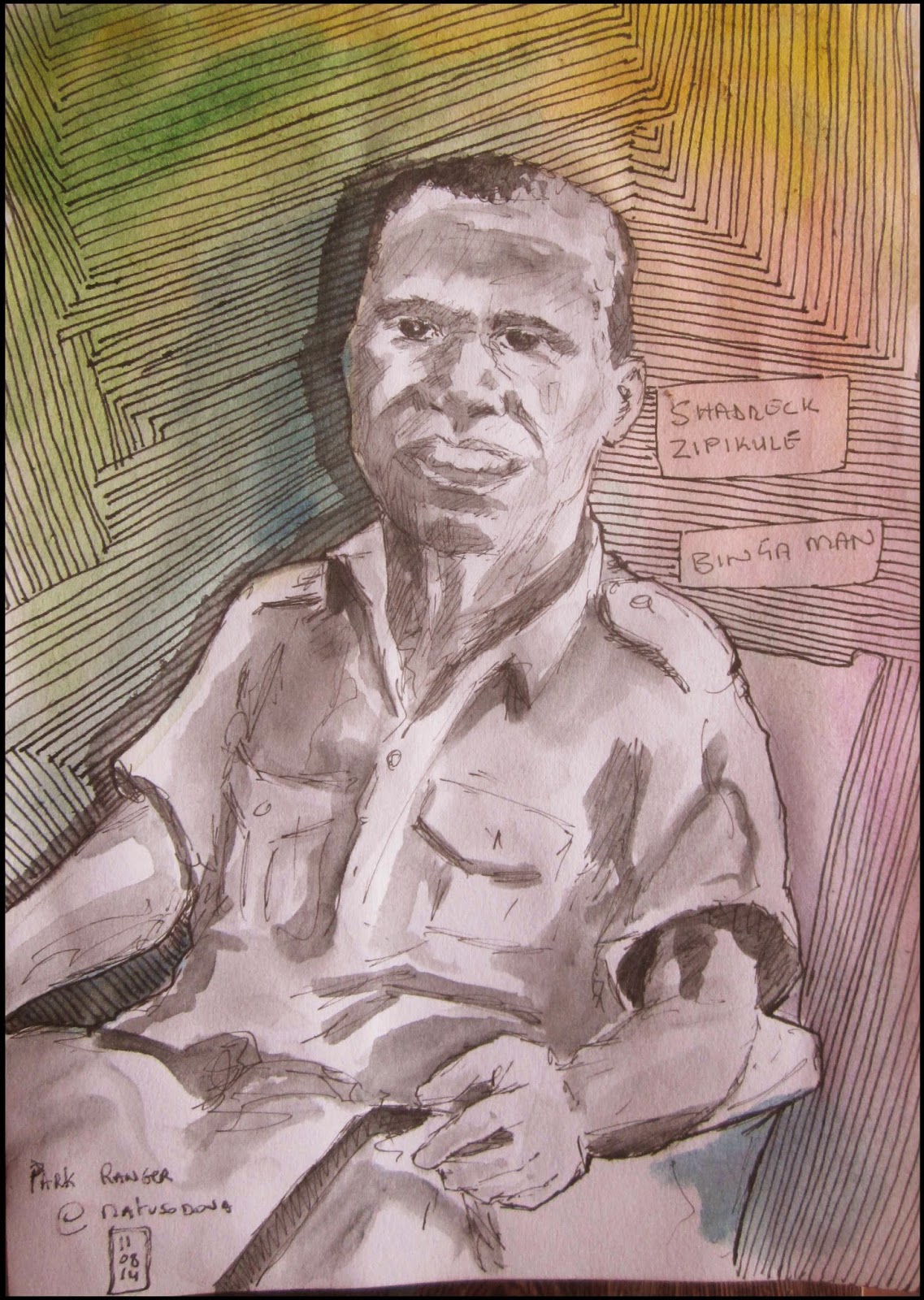 Posted by fredasketch at 12:26 PM No comments:

The sky a day is continuing, with some taken from home, from Chenge camp, on the river (Zambezi) and during that game count on the Matusodona National Park.
There is something zen about looking in the sky, the clouds and in doing that 5 min watercolour. 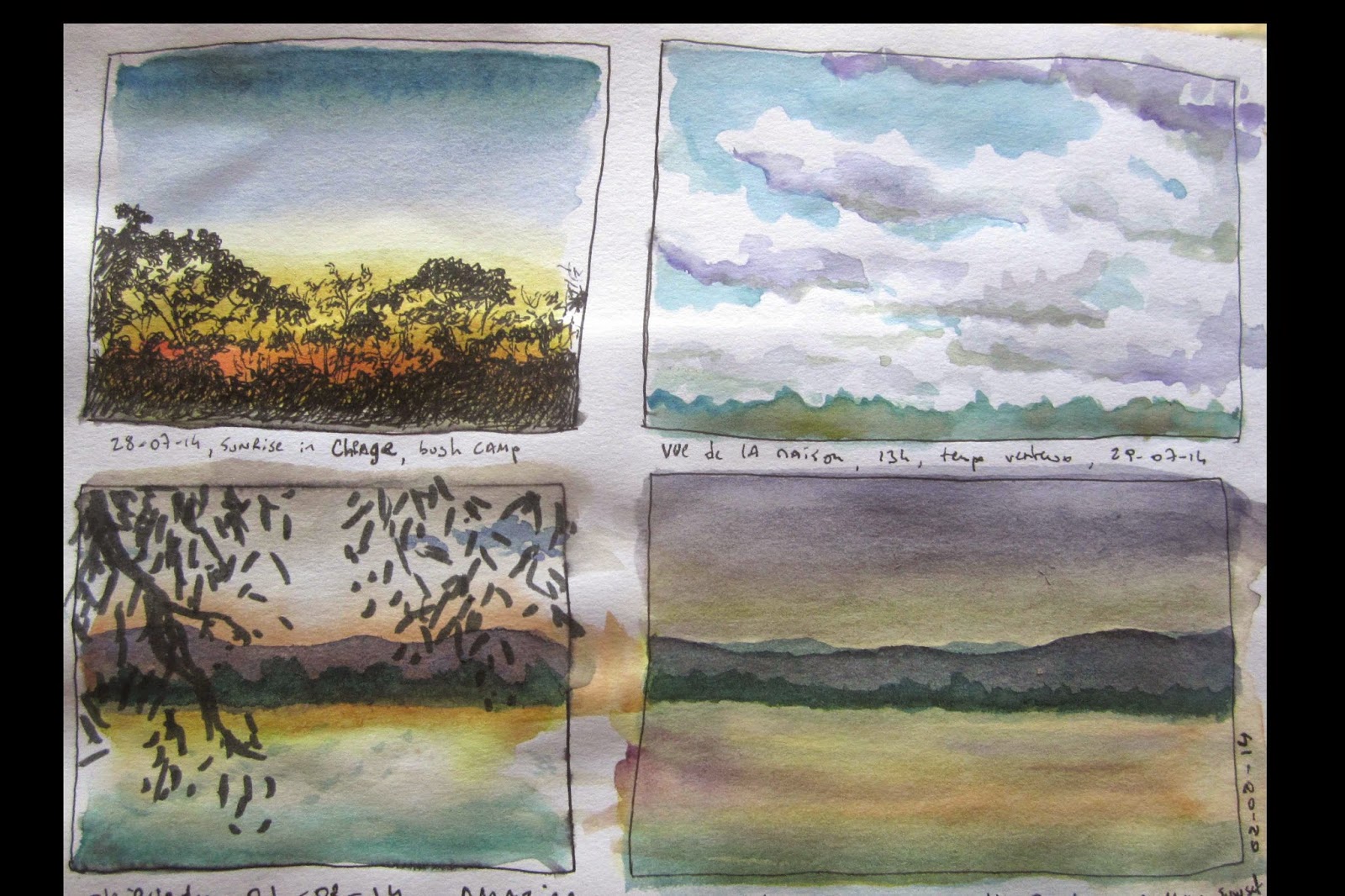 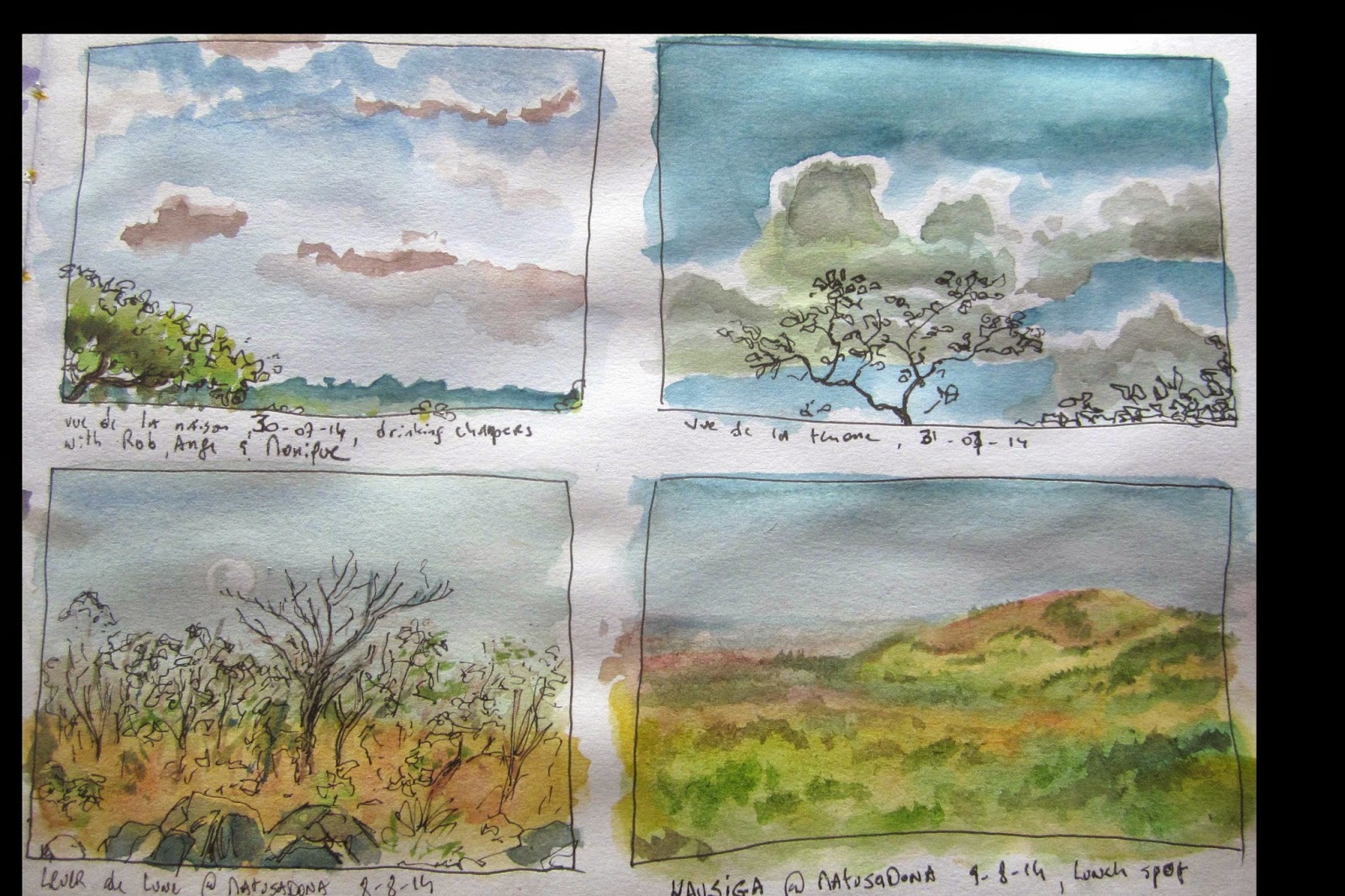 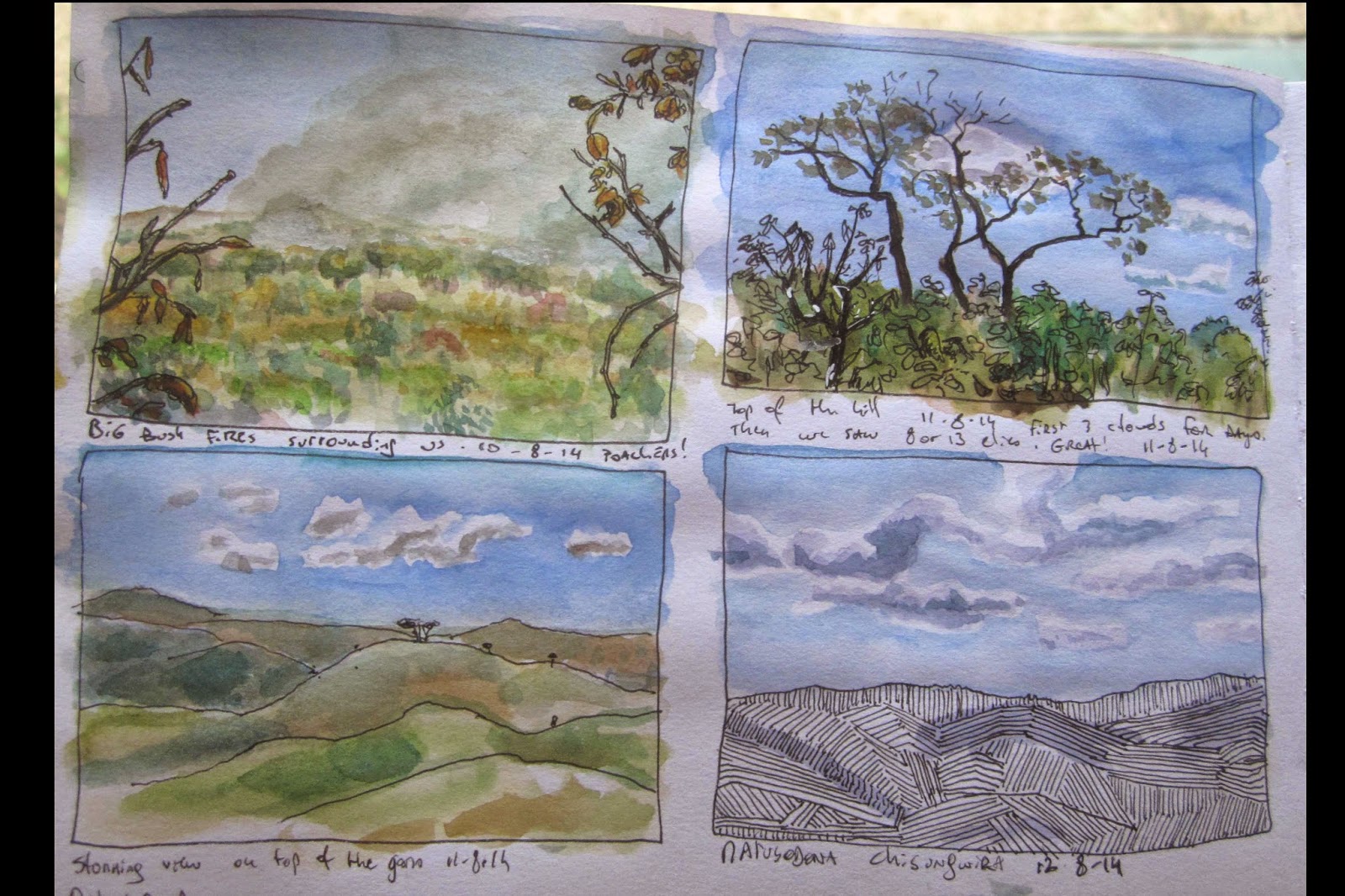 We went to B&T's wedding on the banks of the Mighty Zambezi river, in Chirundu, last WE. A quick trip in a stunning place. Amazing sunsets, a lot of elies and the bush that turns colours now.
The morning of the wedding we went for a river cruise, the family, friends and a springy 88 years old granny. The kids were fishing and only my 4 years-old caught a fillet size bream. She was so happy:  she was then THE expert, telling all the others kids that if they wanted she could catch the fish and they could bring it up. That did not go down well with them, hahaha. For the smallest girl to give fishing advises to her older sibblings, they took it hard on their pride.

As she was chatting about her skills tree elephants came just right next to us for a drink. They must have smelled the passion fruits and apples we had as snacks. They were chilled, we were right in the wind so they were fully aware of our presence there. They stayed for a full half an hour, it was amazing.
Sunsets were wonderful, the wedding in the most gorgeous place, in a plain along the river, with hippos in the water, elies on the other side and a group of baboons crossing the plain. Good omens for B&T!
Here under some sketches I did of our trip.
My colours are still not coming right after the scan, I kind of give up on that issue. 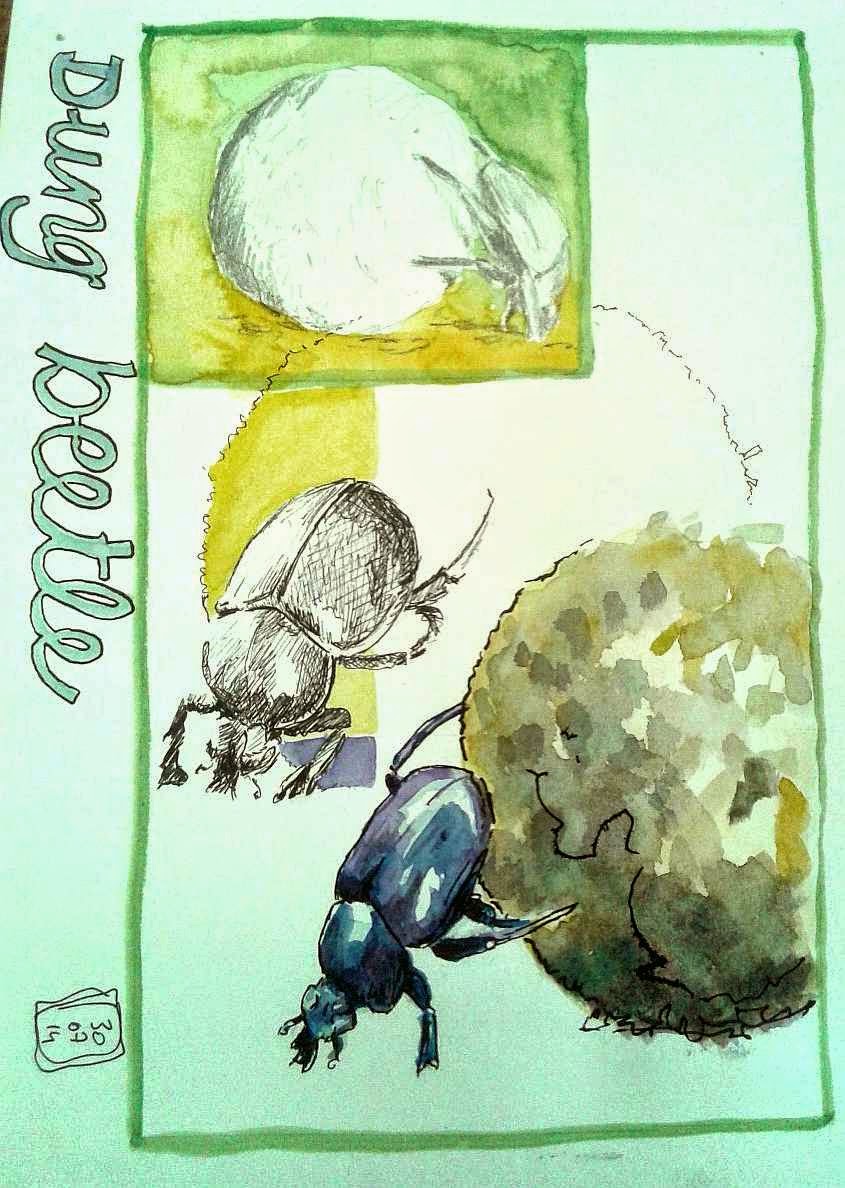 Posted by fredasketch at 3:58 PM No comments: