Tricky times for me in Dublin. There are big changes happening at work, and my colleagues and I are reasonably stressed, angry and frustrated. So the days at the office are very different than what I experienced before. I work with incredible people, committed, passionate,... and they feel like they don't really control the situation. Rather unpleasant. 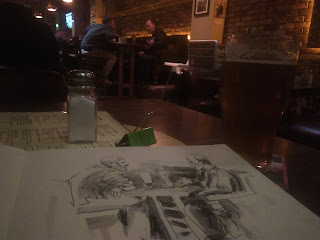 So after work, i much preferred a pub-evening to a TV/ email night in the B&B.
Dublin's pubs are amazing. People talk. People tell their stories, of their family, the incomprehensible political affairs or passionately mumble interesting series of sounds expecting me to understand. I can get if it is Irish or not. Then, if the accent is too strong and the person describes places and people, I smile and sip my beer, then I nod and smile again.
In Ireland I am the simpleton.

In this pub I witness the win of Whitlock on TV, quite an amazing darter. I would recommend checking him out, registering in his fanclub and supporting him unconditionally. The guy does things with darts, surgically puts them in the right places, at the right time. It almost feels sad for his opponents. 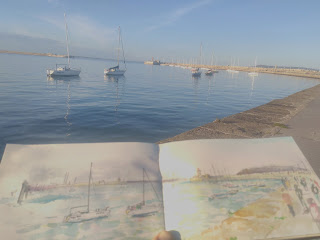 Walking on the pier in Dun Laoghaire puts ideas and priorities in place. The two first weeks of October where incredible, warm and clear, with only little wind. loved it.
I must have mentioned it before but I do not like the sketchbook I have at the moment. I still cannot get around the paper. It's drinking too much and does not dry quick enough, botching. Drinking too much, and I cannot work my ink with water as much as i want. doesn't dry quick enough and the paper remains moist. impossible to work on wet, nor dry.
I could have guesses, it is, after all a pencil sketchbook, but still. I like to complain: I got the book to try other medias, and just don't do it. 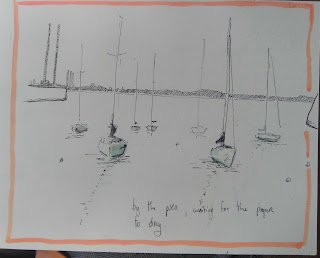 We went walking in Glendalough, a couple of hours walk, an hour outside of Dublin, with spectacular sceneries. The walk was lovely, through an oak forest, then pine trees then the grass and blueberry bushes, tiny purple flowers and unconcerned deers. The mountain (aka hills) went from bright orange to dark green, resting on the two lakes. 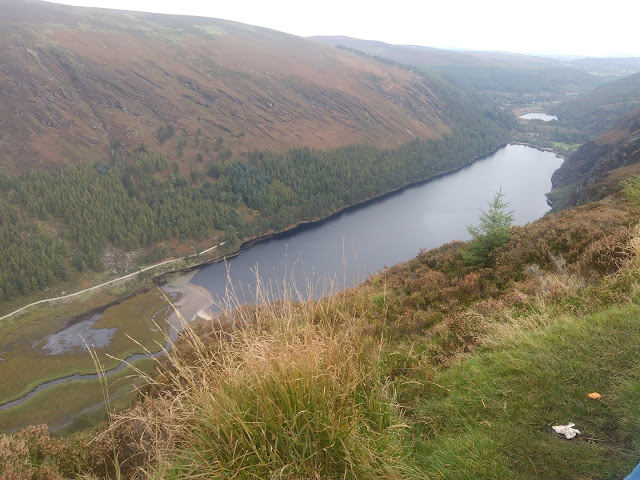 Then, in the distance are the ruins of an ancient monastic-town, which used to be an intellectual hub back in the days. As much as intellectual and 12th century Europe can relate. One feat of the place is a long, pencil shaped tower, with a door that is high above ground. Some say the tower was designed to protect the population and warn of invaders, the raids of the vikings were not pleasant or accommodating towards monks.
When I saw the tower, I knew better. I had seen it before. I have watched Rapunzel, and can recognize the tower she was locked in. All my kids have confirmed about it too. I was very glad to have made it to my first real-life fairy tale princess castle. Missed her by a couple of centuries, happens. 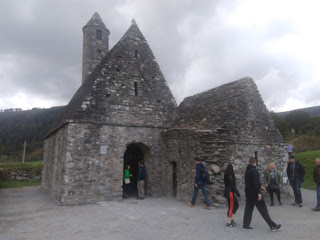 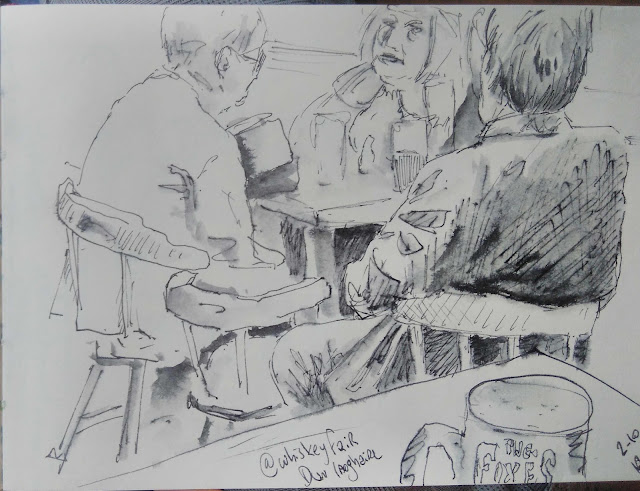 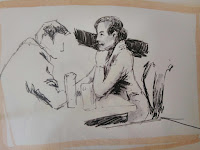 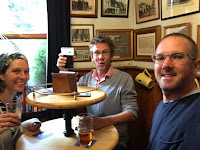 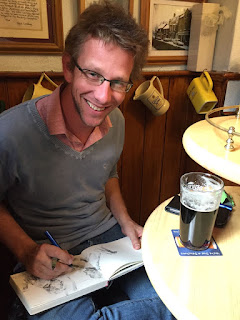 actually these pictures were taken in London, in the pub down the road of my very good mates Rob and Ange. Nothing to do with Ireland. the beer looks like a Guinness, but it is not. It's actually a Pressed Rat and Warthog. Great name for a beer when meeting Zimbos in the UK.
the picture looks good here.
Slainte!

September, October,I just got to spend a couple of days in London and in Ireland for work. It has been over a decade since I last was in London. A very faithful city, where changes are measured by the ticketing system of the tube, and the clothes people wear. Very different from the drastic transformation of neighborhoods, roads and communities we can see in Nairobi, Addis or Kolkata. London peacefully breathe when others blow fire!

It was very pleasant to get there, a comfortable feeling to be back where I left.I guess that is Europe for me, comfortably numb, predictable and faithful. Really pleasant.

I also got quite a great news: the Urban Sketcher crew asked me to be one of their correspondent! I am really chaffed, but realized that I had kind of failed to open my black books since early June. I am not a consistent blogger, which is expected. So: room for improvement, and an extra motivation boost on my side.
I often have grand plans. I can see really clearly things to do and how to do them in my head, but I struggle to make them real. If I give birth to one project for every 100, that is good. Just for Octobre I was planning to go on the Inktobre challenge, learn how to use a hashtag, try to update my blog, to sketch roads and places in London and Dublin, to do some cartoons illustrating the holidays, to paint my daughter’s bedroom (bucket list for over a year), to make a hundred swords (and shields) for my son to sell, to start a comic book,… I guess there are too many things, and too few hours/ days. And I need to accommodate a full time job I love, be present for my family and socializing, discovering new things, walking, breathing.
That would bring me to the pub.
It’s outside of working hours, there is food, socials, pints of beer and the comfort of a place where to sit, talk and sketch. It is the way I cheat, trying to pack as many things as possible in one moment.

Pubs in Paddington, pints of ales and English bitters, versatile pub-food and people speaking dozen of languages appreciating the same piece of English heritage, a pub-quizz with mates, ageless carpets and the constant ballet between the gents and the door, for a quick fag and chat. 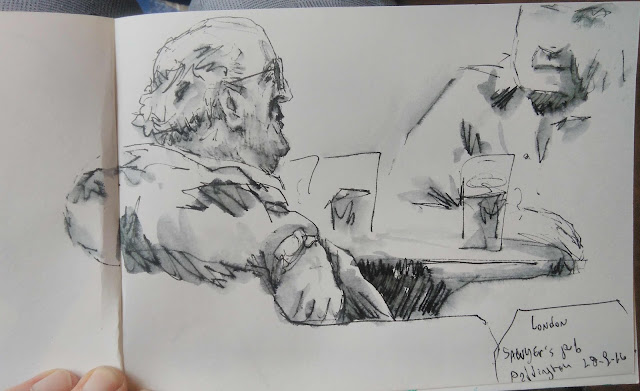 Funny how a drawing tells me stories. This sketch was done after I prayed with a pirate and his wife, on a boat rolling with rum and wine! A couple of hours spend on board of a boat on the canal, invited by a couple to discuss life on the water and sharing stories. 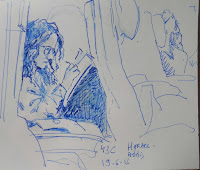 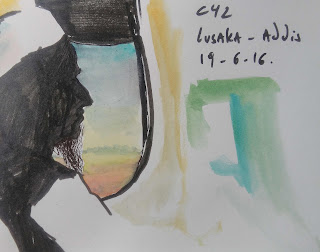 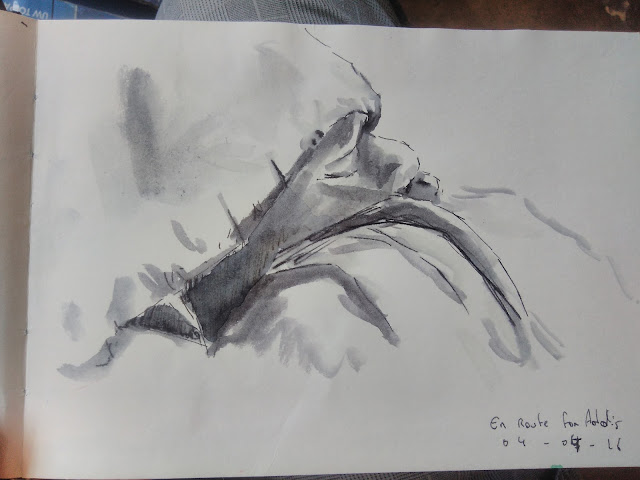 Posted by fredasketch at 5:14 PM No comments:

Inputs from my children

I often sketch when I travel, probably because I find more time. When I am home, I let the kids tell the stories in "daddy's books".
It's much better, and it turns my stories into ours.

Posted by fredasketch at 3:45 PM No comments: