It has been a long time, a wee bit over a year since I last posted.
Also since I last really did paint or sketch. I definitely failed on that objective of mine to create more space for illustration, sketching and creation. I would justify it stating that 2017 was a gap year. And try to con myself, which, since I have a selective brain, may just work.
My excuse, or year in a nutshell: uncertainties about jobs for me and my wife, loss of opportunities and contracts and a rapid and heartbreaking decision we made to move from Zimbabwe to Belgium.
After over 15 years abroad, the decision was not a light one. A month after we decided, we moved, 2 suitcases each, in a house found over the internet and visited by my folks -who have been incredible in sorting out things for our arrival.
Then followed scores of administrative procedures to "exist" back in Belgium. To say it in a few words: we really, really missed Zimbabwe and Mozambican administration where at least you can talk to real people, not fight with pre-designed options to tick. Try ticking non existent options, it makes the system bug. We successfully made the system bug a couple of time. A satisfying experience in hindsight, but infuriating on the moment, time consuming, a great test to patience and faith. Glad we gained skills dealing with civil servants that are underpaid, under educated, absent, unmotivated, tired, corrupt or busy eating in the past fifteen years. It trained us to face the Belgian ones. Now six months down the line, we think that we are now "ok".
So move to a new country, getting things in for the house, stuff like a car, bikes, sofas, a lawnmower, chickens and rabbits. Then have our dog fly -another chapter to the book of great admin conversations-, and looking for a job for my wife - five Chapters in the book, three of them being for the sound of answering machines and response-less calls.
In September things got back on track for my job, and I have not really been home since. Just a lot of work.
Between the move, the procedures, the kids management I have had little time to paint and draw.
New year resolution number:
1. Get the F*[%!#$ brush wet again and the nibs running.
It always works best with swearwords. Or with extremely well defined and precise ones. I try to alternate the two.
So, among the paints we could not take in our suitcase, were these last ones. 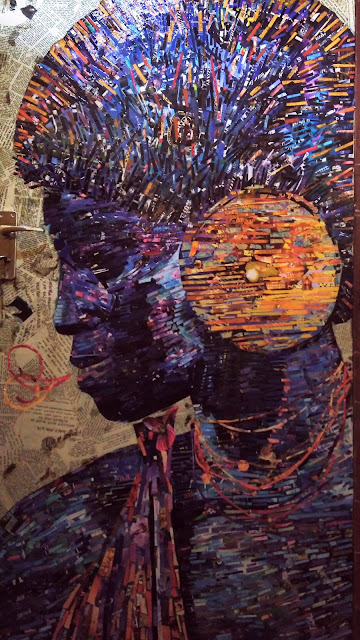 I did a collage on a door and put the door in the room where people stare at doors the most, which is the bathroom/ lavatories. I recently went to visit HIM the Emperor Haile Selassie house in Addis and had the immense privilege to see that he too had a porcelain toilet. If He had to do it, it is safe to say that no one is exempt (maybe Chuck Norris, not too sure about him). This means that art can benefit from undistracted attention when carefully displayed for the entertainment of all with a bowel activity.
The collage took a fair bit of time to finish, was made out of magazines articles that we liked and for which we kept the mags. A lot of stars, travel, nature, oceans and art stuff.
The door is in Harare, we'll see it back one day. 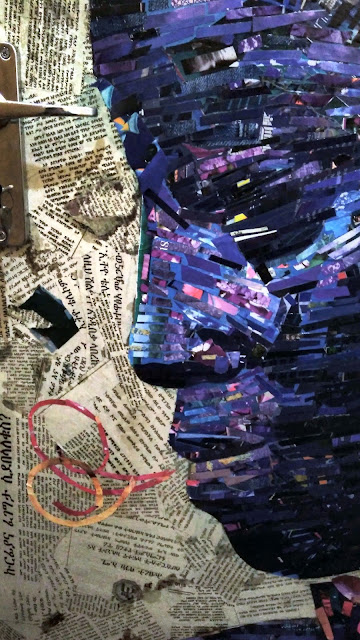 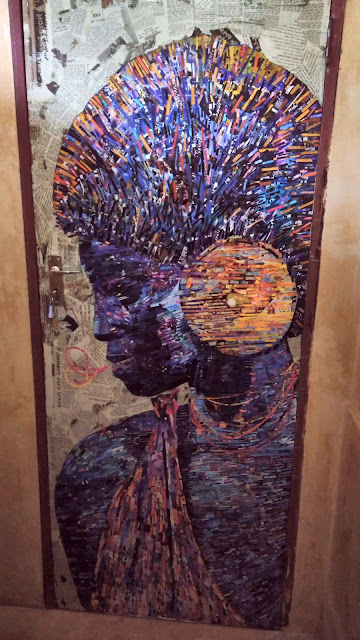 I also had fun with cans and did a couple of Muhammed Ali stencils. For fun. Now I'm cutting a picture of my daughter, playing in the ocean. I prepared for a 9 layer stencil. It takes ages. I kind of underestimate the amount of work the water gives. One day I shall finish that too. 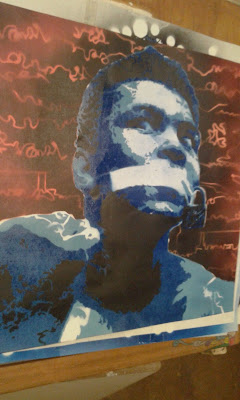 And last but not least, the multiple face I did at Shoko Festival found a new home in H-town. Looking good there for sure. 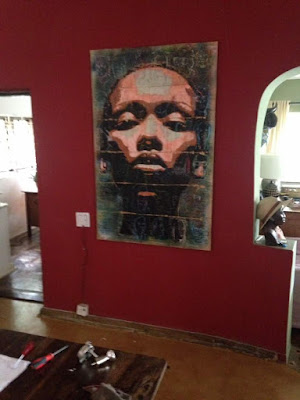 Posted by fredasketch at 11:17 AM No comments: