Just the right time to post about Gorongosa it seems, since its top of the news. The army bombed and attacked the Renamo's paramilitaries there last week. The opposition kept some armed men in the district since the end of the armed conflict in 1992. Well it seems to be the end of that. They are out of the place and back shooting people on the road, attacking taxis, villages and creating a rotten climate of fear here. People are afraid that this can mean a new start for the civil war. Nobody wants war, memories are still strong...

Gorongosa is a district of Sofala, a province in central Mozambique, and there is one of the best national park/ nature reserve that can be found.
www.gorongosa.org
The national park is amazing but since Girassol hotels took over the management of the lodges, food and accommodation prices are outrageous, and clearly out of reach for the middle-class Mozambicans. the only way to go is to camp there, or to sleep 50km from the park. It is sad that wildlife conservation is reserved for luxury and wealthy tourists.
Why Gorongosa worth the visit? Because you will drive within a short space in different ecosystems, from wetlands, bush, plain, fever tree, masasa or Ilala forests, tropical rain forest, mountains etc.
The different ecosystems are always showing something great, and are full of moving creatures.

I went there for two days in September, it was my earthday and my family was in Zimbabwe. So I borrowed a tent and a cooking device, packed a mattress, some food and drinks- mainly cerveja and jumped in my car, to get to the park gates before it closes.

I was driving sweetly until my tyre exploded. For no reason, no potholes, no stones, no dead goat no piece of scrap metal from the previous truck accident. The tyre was completely ripped. No big deal, I have a spare one and changing it shouldn't take too much time.
Or so I thought.
A couple of months before I moved my tyres around and put 2 new ones in the front. I did that in Harare, in a legit shop.
They screwed the nuts back too tight.
I completely broke two wrenches- a shiny one, brand new chinese quality - the seller warned me about the fragility of the utensil but I choose not to listen - and my other old one, who was, well, too old.
I broke 2 wrenches, and was sweating with only one nut off.
A guy came to help, I stopped sweating and started watching. He came to the same conclusion than me, went to fetch a third guy, with another wrench and a 2 meter pipe. It took the tree guys jumping on the pipe to enable to get the nuts off, and then change the wheel. Once the nuts were out it took 3 minutes to change the tyre.
It may seem as a detail, but in wild wacky Afrika, a tight nut-job can make all the difference between life and death. Always better to stay a bit on the loose side.
I got to Gorongosa just on time and spend the two next days enjoying spending time sketching animals, spending time looking at them, driving little,... just taking time. Generally, when we go to nationals parks with the family, the balance between driving and keeping the kids entertained watching an animal is very narrow. If you drive too much they complain and your game drive will last 2 hours and see all your snacks eaten. If you stop too often they get into a fight and out of 4 children there will always be one who shout/ want to go/ wants to eat/ don't want to share.
So for a WE I enjoyed my own company. I need to do that more often indeed. It is incredible the amount of things to be seen when you do not drive. As well I had the great chance to be in the park when pelicans and African monarchs were there to rest, eat and be eaten.
Oh and my tent has been attacked by a porcupine at night. I know it would have sounded better for me to say that I was surrounded by lions and hungry hyenas and that I had to defend my grilled chicken against wild and blood thirsty beasts, but it was not the case. I was sleeping and a porcupine' mouth noises woke me up, he entered my tent, then probably saw that I was not his type and decided to leave. It was good. When you lie down half sleeping, a porcupine seems very big.

So I had a great time.
.
Here under some of the sketches done during the 2 days, trying to fit them all on one page. 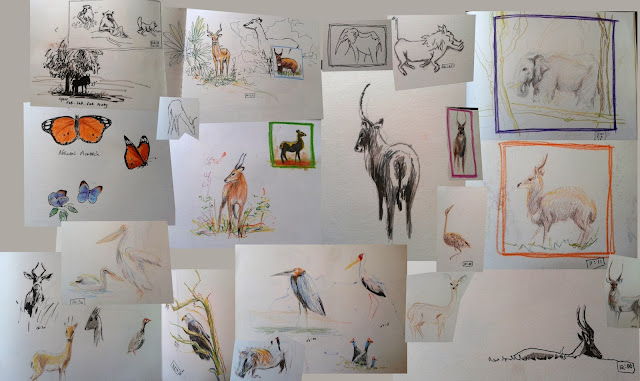 Done in Prismacolour and Unipen. My book (Seawright) is too old and its paper has become very very porous, incapable of holding water any more. So I have to draw dry. I bought 2 such  books ages ago. The first one I used 10 years ago in Benin, and the paper was great at the time. I have since seen that some inks have made their way through the paper of that one. bizarre. must be due to the humidity. And this book I have now is not able to deal with water or any wet thing.

Posted by fredasketch at 6:00 PM No comments:

I had the opportunity to work for a week in Windhoek last July, which was really excellent. But because it was for work, there was little time to do something else, such as walking around, meeting new people etc. Nights are falling too early in winter for outdoor sketches and Windhoek is not a very busy place. It actually seemed rather quiet, the type of stillness of a small city... the light joie de vivre of a German town in the middle of the desert.
And the feeling is enhanced with poetic street names such as LudwigvonBeethovenStrasse, buildings carved with the true art of bavarian architecture, a sense of order and decent beer. Namibian Breweries are trying hard to match Belgian brews, and it is appreciable. 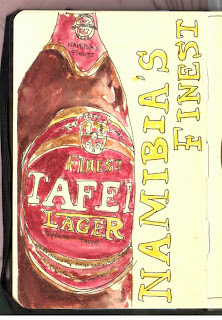 I did manage a day to walk around and do some sketching of the place. The capital seems to have grown a lot over the past decade, there are new malls, big towers, shops... Lost in the middle of the concrete newbies the old city still stands, a bit like Lilli Marlene surrounded by Star Academy contenders.
It feels absolutely odd. 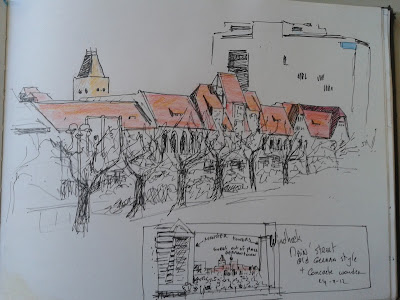 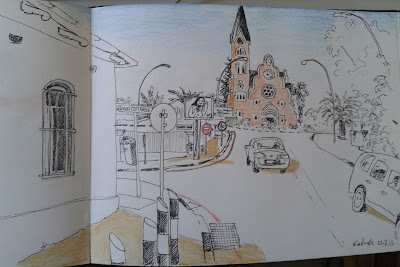 This church (Christuskirche) is a landmark of the capital, and is surrounded by many old buildings, including the museum, old fort  (here under). The church has been build and shipped in parts to Namibia, back in the days. There was a wedding happening . 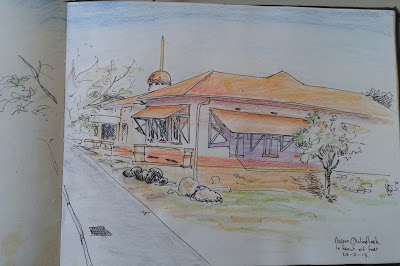 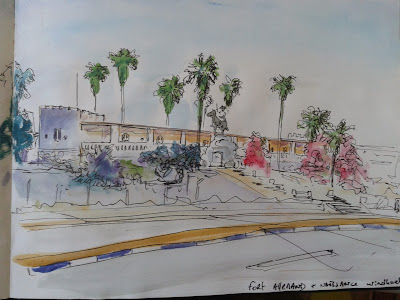 This fort stands were the German troops held camp (Alte Feste Fort). The Fort is now hosting the national museum, interesting to understand the liberation struggles, the fights of the Herero against the Germans, the organization of the firsts concentration camps (Shark Island...) between 1904 and 1907,  the struggle that led Namibia to become the last country to take its independence in Southern Africa.
Thank God, all these old buildings collecting dust and acting as a reminder of the colonisation are now dwarved by a brand new piece of wonder, a type of shiny barrel-looking building.
It not of everyone's taste,  I can understand the need to mark the place and, as a symbol, to show that the German colonial presence is something from the past, but I do question the artistic- pertinence of the golden barrel standing between the church and the fort. 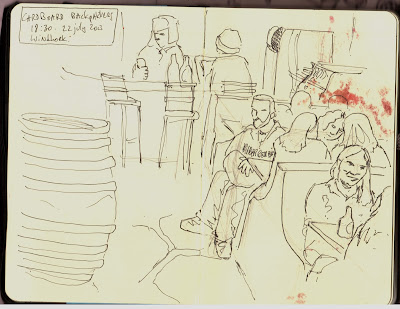 I went once or twice to the cardboard box backpakkers for a couple of drinks.(http://www.cardboardbox.com.na/cardboardbox.html) My hotel was just next door but had no bar. I also sometime prefer to talk with travellers on a shoestring who have 10.000 tips and stories to tell, including one involving a bus driver who - going off the bus to pay his road-fee,  came face to face with a smiling lion and ran back to his seat faster than Ussain Bolt.
It is pleasant to hear stories and not having to discuss the foreseen consequences of the economical crisis on the pecan-nut  market and the compared competitiveness of a Namibian prawn fishermen compared to Mozambican one.
I also went to a groovy spot in town, but I have no ways of remembering its name. The music was great, and good company as well. It was on the left side of town. good spot, I recommend it.
Posted by fredasketch at 5:55 PM No comments: